The old adage of Lightning never striking twice was put to the test at Surrey Sports Park today, and the theory was well and truly confirmed.

Loughborough lightning had already struck Harlequins Ladies earlier this season, when they beat them 41-17 in just the third match of the Tyrrells Premership.

However the team that visited Loughborough on September 22nd was a shadow of the current crop, and today it was Quins who provided a Storming start from which lightning never recovered.

Playing with a strong wind behind them Quins built up a first half lead of 19 points to nil.

After just 6 minutes Heather Cowell went over for a try brilliantly converted by Ellie Green, and just 7 minutes later scrum half Leanne Riley scored a try, once again superbly converted by the “Green Machine”

Quins third try came from Georgia Newman on 34 minutes, giving the home side a 19-0 lead which they took in to half time.

As the Dark clouds gathered overhead for a gusty second half, Harlequins, playing into the wind, continued where they left off before the interval, and a break from Leanne Riley, who played an absolute blinder, led to try on 50 minutes for Emily Scott, before the England scrum half broke from her own half and scored a wonderful individual try on 53 minutes.

Lighting pulled back a converted try on 57 minutes to bring the score to 31-7, but this was a temporary reprieve as ruthless Quins scored two further tries through Heather Cowell on 69 minutes, and replacement Chloe Edwards in the 78th minute. which Ellie Green converted.

Make no mistake, this was a comprehensive victory for Quins against one of the best teams in the league, Lightning barely had a sniff, such was Harlequins dominance and accuracy in all phases of the game.

The home team’ seven tries gave them their third bonus win in a row, and Heather Cowell’s brace makes her Quins top try scorer with ten from eleven matches.

Harlequins win moves them up to second in the table.

As the game ended the wind dropped, and the rain came, but the threat of lightning had been extinguished. 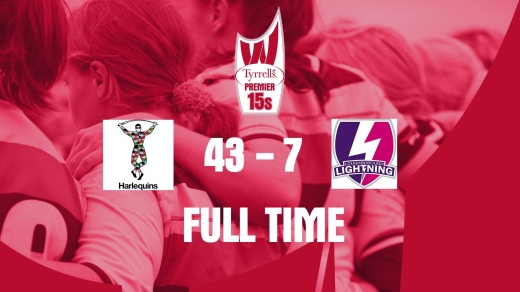