The Wales Grand Slam winning side of 1976 was pretty special, it contained names that have gone down in rugby legend as some of the all time greats, they played with a verve and an insouciance the like of which we Welsh pine for in these modern professional times.

So when, on 16 October 1976, Argentina came to town to play a fully laden Wales team, the expectation was one of an inevitable comfortable victory for the star-studded men in red, how wrong could you be.

In the lead up to the international, Argentina had beaten an East Wales side 25-22 at Rodney Parade, and followed it up with a 29-26 win over Cardiff.

An 18-6 victory over Aberavon followed, but four days before the match against Wales, the Pumas were beaten 14-12, at Stradey Park, by a West Wales side that included, Elgan Rees, Clive Griffiths Andy Hill and Geoff Wheel.

A large crowd gathered at the National Stadium for a three o’clock kick off, and to witness a contest within a contest as two of the greatest fly halves ever to grace the game faced each other, Phil Bennett the magical diminutive pale-faced Welshman, and Hugo Porta the Argentinian with the swarthy elegant film star looks, and it turned out to be quite some battle.

The scores were level at half time 6-6, two penalties apiece.

Wales scored two second half tries through Gareth Edwards and Gerald Davies, but as the match progressed the home crowd were about to witness the unthinkable.

George Gauweloose side-stepped JPR Williams forty-five metres out and ran over for an Argentinian try started way back in their own twenty-two.

The sight of JPR being beaten once in a match was a rarity, so when Gonzalez Becca Varela also ran past the great man to score in the corner, after Roy Bergiers had lost the ball in the Pumas twenty-two, there was an air of disbelief in the Cardiff autumn air.

As the match entered injury time, Argentina were leading 19-17, with seconds left to play Wales were awarded a penalty, following a high tackle on JPR Williams, which Phil Bennett converted to give Wales a 20-19 win.

Gareth Edwards rates the Pumas fly half, Hugo Porta, as one of the true greats of the game.

“Hugo gave Terry Cobner, Trevor Evans and Mervyn Davies the runaround that afternoon, Merv named him as the best fly half he had ever played against.” 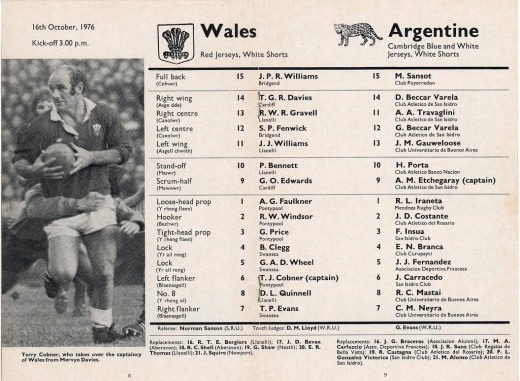 The match is still hugely revered in Argentina, indeed in 2016 the governing body arranged a massive gala de rugby to celebrate the fortieth anniversary of this memorable game.