It has finally arrived, after months of anticipation the wall charts are blue tacked to the kitchen units, fridges are full and we are ready to embrace a Rugby World Cup in the land of the rising scrum.

For Wales going into a Rugby World Cup as potential winners is a totally new experience, but they dare not think too far ahead, and for now, like Ray Charles, they’ve only got Georgia on their mind.

A nation that borders Azerbajan, Russia, Armenia and Turkey in one of the most volatile regions of the world, is not going to be passive and take too much nonsense, physicality will be their main weapon particularly at scrum time.

Mikheil Nariashvili, the Montpellier prop, is one of the best loose heads in the game, hewn from the rocks of the Caucasus he is so tough it is said he can even break Tonka toys.

Fellow Montpellier lock Konstantin Mikautadze has turned out for the Barbarians and at 6ft 7ins and 20 stone his line out presence will be notable, although you can only feel sympathy for his lifters.

The French connection is felt throughout the squad with 16 of the 31 players plying their trade in the Top 14 or Pro D2.

Georgia’s main industries are steel and coal, a throwback to Wales glorious industrial past, and the capital Tblisi is twinned with that other war torn region of the world, Bristol, an unlikely twin you would think.

Wales face Australia on Saturday after a short six day turnaround, so selection will have given Warren Gatland plenty of food for thought, but this is a match they dare not lose.

In 2017 Gatland put out a second string outfit to face Georgia in Cardiff, Wales were very nearly embarrassed, but scraped home 13-6.

It has been yet another roller coaster week in the history of Welsh rugby, after the joyous reception in Kitakyushu, where 15,000 turned up to watch Wales train, but things soon came crashing back down to earth as backs coach Rob Howley was forced to return to Wales, to face an investigation of an alleged breach of World Rugby’s regulation six which covers gambling and anti corruption.

Tomorrow’s match at the City of Toyota stadium will be a tough one and with Australia and Fiji to come things will not get an easier. 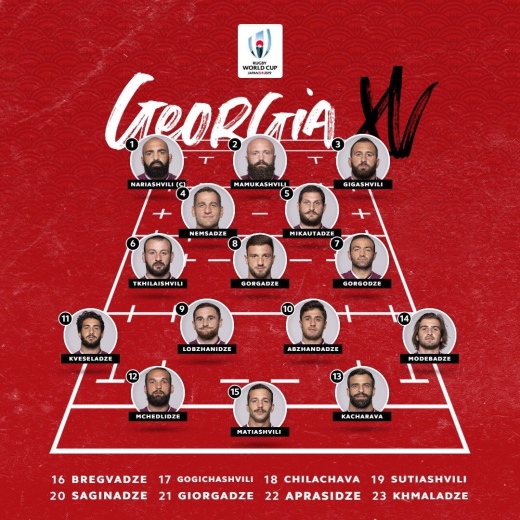