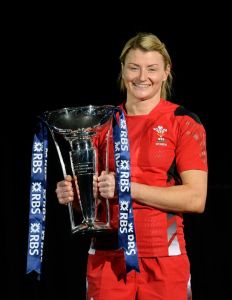 If you haven’t seen a women’s international rugby match, you are in for a shock.

The women’s RBS 6 Nations match, between France v Wales, a couple of weeks ago, was brutal, and I have seen many mens’ games with less physicality.

So go to St Helens, Swansea on  Sunday and you will be in for at treat, as well as the possibility of witnessing a Wales Triple Crown.
Caroline Spanton, who leads the development of women’s and girls’ rugby in Wales, at all levels, wants her side to replicate their triumph in that memorable opening weekend win against world champions England.

“The win over England has been crucial,” she told the BBC. “The amount of communication and profile we’ve had since that win has just spurred the women’s game on.

“The team have worked so hard to achieve the success that they’ve had and they’ve thoroughly deserved that.

“It’s a 12pm kick off and a big home crowd will really boost us – hopefully we’ll get that Triple Crown that the girls and the squad deserve.”