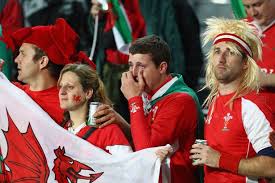 It’s now Tuesday night and the pain has not gone away , I’m still reliving that first half at Twickenham, when my burst from the sofa to the Nespresso machine, whilst side stepping the cat, had more gusto, enthusiasm and elan, than anything produced by Sam and the boys.

Another 6 Nations title goes begging, and I can’t help but think that this golden generation should have had a lot more titles than they have achieved, these days will not be around forever.

We are now used to Wales competing with the very best, our expectations are higher than ever, and so they should be with such a talented group of players at Wales’ disposal.

I am old, and was lucky enough to have lived my adolescence with the back drop of Grand Slams, Triple Crowns and legends in red, despite my acne, these were magical days.

JPR, JJ, Gareth, Barry, Phil, Swerve, Bas and Reames were my heroes, and I thought it would last forever.

But Then came the 80s and 90s, when losing to England, France and Australia by ten points was an occasion to celebrate.

So we are  disappointed, sad and emotionally bruised, but let’s look at the positives of this current crop ,and these generally rosy days of Welsh international rugby.
In the last 5 years we have lost 5 matches in the RBS 6 Nations

We currently have a humble, honest, down to earth squad who smile, speak politely to you and make you feel proud to be Welsh.

Believe me no one gets more upset when Wales lose than me, but let’s celebrate, our players, our fans, our anthem , our stadium squeezed in to our capital city that makes it all so special .

Win or lose I wouldn’t want to be a supporter of any other team other than my country of birth.

Enjoy the Italy game give the boys all you’ve got because they will be hurting even more than we are !