There was a try in the France v England match, at Parc des Princes in 1986,that captured the poetic beauty and sheer heart stopping majesty that was French rugby.

A French scrum just outside their own “22” Berbizier puts the ball in, twenty seconds later Phillipe Sella is running behind the England posts and touching down for a try.

In between those two acts all artistic and sporting forms combine, from opera to ballet, from gymnastics to athletics along with sleight of hand and fleet of foot.

Berbizier passed to fly half Guy Laporte, a missed pass reached Charvet who fed Eric Bonneval, ten metres from his own line.

Bonneval made an arrow straight run up the centre of the field, a mesmerizing seventy-five metres gained, interspersed with a swerve and dummy, before passing high and left to Denis Charvet thirty metres from the English line.

Charvet took the high pass, flirting with the touch-line, teased the England defence using the ball like a Matador’s cape before delivering the final pass to Sella to apply the coup de grace. 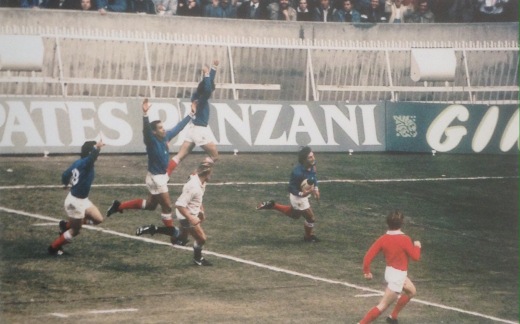 As Les Bleus ran back to the half way line, the sheer joy etched on their faces in the hot  Parisian sunshine, reflected the sheer joy of their artistry, as the crowd rose to their feet, as one, in homage, they were witnessing French rugby as it was meant to be played.

The Basque band beat their drums a little louder as Laporte kicked the conversion.

How we long for just a glimpse of those days in current French international rugby, just one scissors move, a dummy a swerve, a flick of the hips, a swagger or even just a look of unadulterated joy on a players face.

It used to be said that if you played France in Paris with the sun on their backs, then you didn’t have a chance, well lets hope for an extended heatwave this autumn.