It has always been said that rugby is a religion in Wales, so on Easter Saturday a Guinness Pro 12 double-header at the cathedral of Welsh rugby seemed entirely appropriate.

The pilgrimage to the principality stadium resulted in a congregation of 60,642 worshippers from all parts of the country and beyond.

One definition of judgement day is “The time of the last judgement, the end of the world”, and as the Ospreys trudged off the field after their defeat in the opening game,the end of the world appeared to be an extremely apt description of their collective mood.

As for Cardiff Blues, well the book of revelation would not have done justice to their  incredible 35-17 victory, scoring five tries in the process, and from the moment the Ospreys defence parted like the Red Sea, in the 6th minute, there was only one team in it.

Blues led 21-3 at half time and after 46 minutes were 35-3 ahead to the disbelief of everyone present.

Two late tries from the Ospreys gave the scoreboard a less embarrassing look, but this was a good old-fashioned thrashing make no mistake.

Sadly we went from feast to famine in the second game of the day , a Scarlets v Newport Gwent Dragons encounter that made watching paint dry seem like a white knuckle ride in comparison.

Two penalties apiece made it  6-6 at the interval, the most exciting break in a dire first half came from a pitch invader, who even ten minutes into the second half , was still favourite for the man of the match award.

Fortunately after a Jon Davies try on the hour mark, Liam Williams woke us from our slumber with a try and a place kicking display that revealed his ability to hit goalposts from a variety of angles and distances.

A win for Scarlets that cements their play off hopes, but a huge disappointment for the crowd that was expecting much more in the way of excitement from such a talented back division.

Making his 150th Pro 12 refereeing appearance in the match was Wales’ national treasure Nigel Owens, a remarkable statistic from a remarkable man. 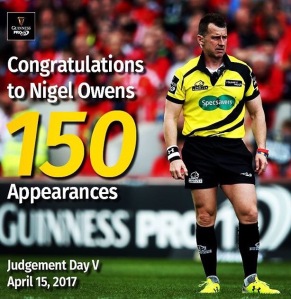 An afternoon under the closed roof of the principality stadium drew to a close, and as the masses exited the dark bowl, blinking into the bright blinding low evening sunlight, the talk of Dragons becoming extinct was on everyone’s lips, a proud rugby land without Dragons ? Blasphemy surely.