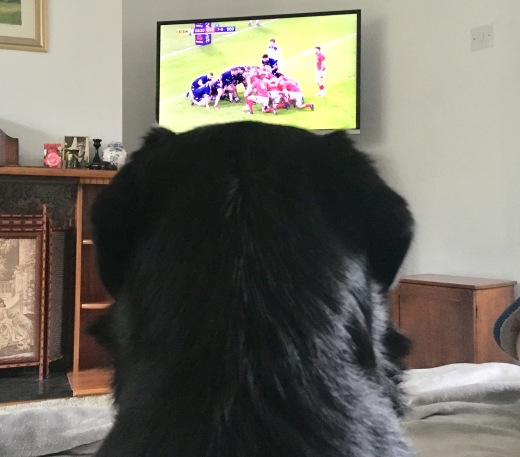 I knew that the Saturday rugby marathon was going be tough, an early morning start  heading for the Nespresso machine, side stepping the starving Labrador and looking more like George Formby than George Clooney (me not the dog).

First up were the All Blacks, the coffee and Labrador also both all black, as black as the eye of poor Remi Grosso the previous week, France looked as tired as I was, they sadly did not have instant access to another espresso, something “Les Bleus” strength and conditioning staff may seriously have to look in to.

Time for a bonio for my four-legged assistant, not something I would recommend for the French back line, although a supplement possibly the front row might benefit from, although with hooker called Chat maybe something more feline would be appropriate.

France forgot about breakfast and made a bit of a dog’s dinner of a challenge in the air, resulting in a red card, and for once pride came after a fall as a gutsy fourteen man effort made life difficult for the men in black.

Already  three coffees and two bonios down, we were in danger of peaking far too soon, there were still three internationals to navigate.

Argentina v Wales was at this point in time still ten hours away so pro rata we were looking at an intake of thirty coffees and twenty bonios, a serious over indulgence for both man and canine.

Fortunately there were a couple of three-hour windows following Australia v Ireland and South Africa v England, enough time for some serious hydration, stick throwing, and a dip in the local pond, if only the dog would join me.

As the Boks took the lead in match three, my four-legged friend was losing interest, a bit like the England defence his concentration had gone, and thoughts had turned to other matters as he attempted to jackel a tin of “Chappie” entering the cupboard from the side, like any self-respecting All Black Labrador.

By the time Argentina were lining up to face Wales, the boy was spent, he had nothing left to give, I was hanging on in there with my protein shake to hand, okay Peroni isn’t strictly a protein shake but what the heck.

Argentina v Wales was just one match too far for he furry one, but he missed a treat as a young Wales side bossed matters and beat the Pumas convincingly resulting in a test series win for the men in red.

I’m not sure either of us could cope with too many Saturdays like that, even George Clooney would struggle to keep up with the coffee intake involved, but we have to do it all again next Saturday, it’s a dog’s life.

If you are a Labrador lover, you may wish to vist the website of balladofdoggybonar.co.uk for all the adventures of a secret service labrador, or even purchase his books available from Amazon. He’s also on twitter @DoggyBonar004