The similarities between Buenos Aires and Lille are few and far between, but a juicy steak and a glass of Malbec, pre match in Northern France, can fool the senses, and the emotions, prior to an exciting encounter at Stade Pierre Mauroy between Los Pumas and Les Blues.

A late Saturday night kick off, as they love to do in France, a time back home, in Argentina, more suited to dancing, and particularly the tango.

The tango developed in the working class neighbourhoods at the end of the 19th century, its lyrics speak of  nostalgia, sadness and a lament of lost love

The Pumas have been in a tango state of mind since the 2015 Rugby World Cup, where they showed us their “moves”, but have been somewhat out of step since that wonderful tournament.

However just lately there are signs that they have re discovered their rhythm under their new conductor Mario Ledesma.

On a freezing cold night under the roof of  Stade Pierre Mauroy France ended their losing streak of five consecutive defeats and tamed the Pumas.

They say it takes two to tango, and the dazzling dancing feet of Teddy Thomas and Bautista Delguy bedazzled onlookers with moments of beauty amidst the brutality.

The physicality of two nations, for whom the scrum is a proud and noble art, and even in these enlightened times a personification of pride and manhood, provided an antidote to the beauty and elegance of the dancing “Ailiers”

The two hookers, and opposing captains Guilhem Guirado and Augustine Creevy may not look suited to the subtle and lithe moves of the tango, but as bouncers on the door of Bar Los Laureles i’m pretty sure you’d have no problem with gatecrashers.

The Opening two minutes saw Argentina score a try through Ramiro Moyana and lose full back Maxime Medard through injury.

Teddy Thomas scored a wonderful try for France on twenty five minutes who led narrowly at half time 11-10.

In the second half les Bleus found their dancing shoes Teddy Thomas, the Lord of the dance, made it a two-step with his second try after 48 minutes following a Fickou fandango, and the big man Guilhem Guirado glided over in the 70th minute. 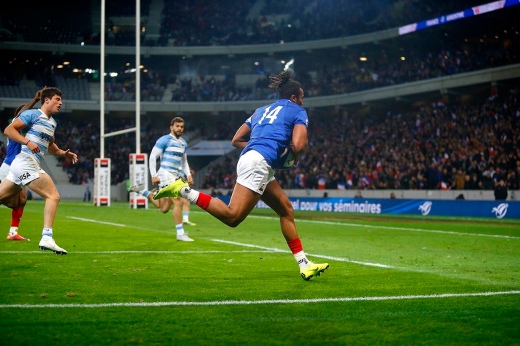 Mathieu Bastareaud was a monster in midfield, no tango for him, more of a can-can with attitude but no less exhilarating to watch.

In the end the warm passionate tango we anticipated was more of gentleman’s excuse me, there were brief bursts of back play from France that made your heart skip a beat, on their day come next years World Cup they will be a serious threat.

In the meantime on a cold winters night as midnight approached and the players completed their media duties,  thoughts turned fleetingly to 21 September 2019 when these two next face each other, at Tokyo Stadium in the Rugby World Cup.