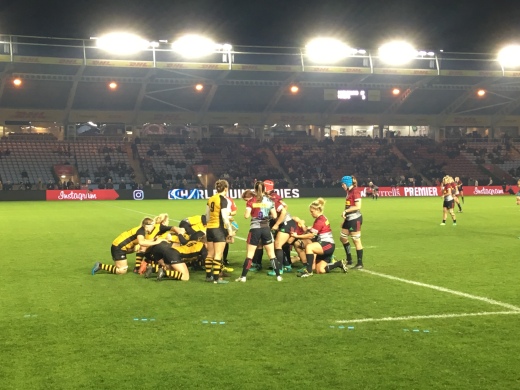 There was a real buzz at the Stoop yesterday, and with the visit of Wasps you would expect nothing less.

Wasps started lively but it was Quins who took an early lead with an Ellie Green penalty after 5 minutes.

Lizzie Goulding equalised for Wasps with a 19th minute penalty.

There is an old rugby adage, that states forwards win matches, and the backs decide by how much.

A quote that sums up this match in a nutshell.

The Quins pack began to dominate proceedings with bullocking runs from Shaunagh Brown along with line out dominance from Abbie Scott and Zoe Sayner.

On 25 minutes that dominance bore fruit as Davina Catlin crashed over at the back of a rolling maul for a try which the “Green Machine” converted.

With the score at 10-3 to the home side Catlin crashed over in the 38th minute, with a carbon copy of her first try, which Ellie Green converted.

A half time lead of 17-3 was no more than Quins deserved.

In the 53rd minute the dominant Quins scrum went over from five metres, and Fiona Fletcher touched down for a try once again converted by error free Ellie.

Four yellow cards in 14 minutes disrupted the flow of the game.

Quins Ellie Green got the first on 55 mins, before Wasps Lizzie Goulden and Quins Emily Scott were dismissed, after attempting to exchange jerseys rather earlier than is the usual custom, Wasps Claudia MacDonald also saw yellow in the 69th minute.

Wasps looked livelier when Danielle Waterman switched to scrum half, and they were rewarded with a try on 79 minutes from Garnet Mackinder

As Twickenham’s finest launched their Waitrose fireworks, providing a colourful backdrop to proceedings, Quins pushed for a fourth, and bonus point gaining, try but it was not to be.

Quins will be delighted to go into the autumn break with a fifth consecutive win, they are improving game by game and have a mean old pack that will be a huge asset when winter truly arrives. 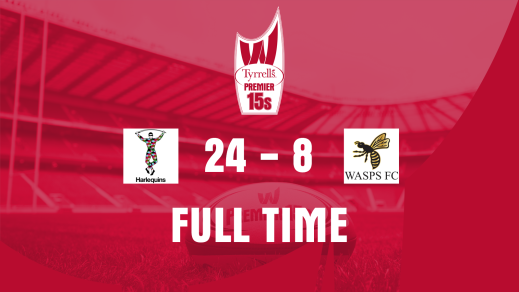