“The past is a foreign country they do things differently there” is the immortal first line of L.P. Hartley’s The Go Between. which wistfully condenses the problems inherent to memory and history. Distant, intangible, unreliable, lost, our histories, at the levels of personal and national, are at best half-remembered and at worst actively misrepresented. 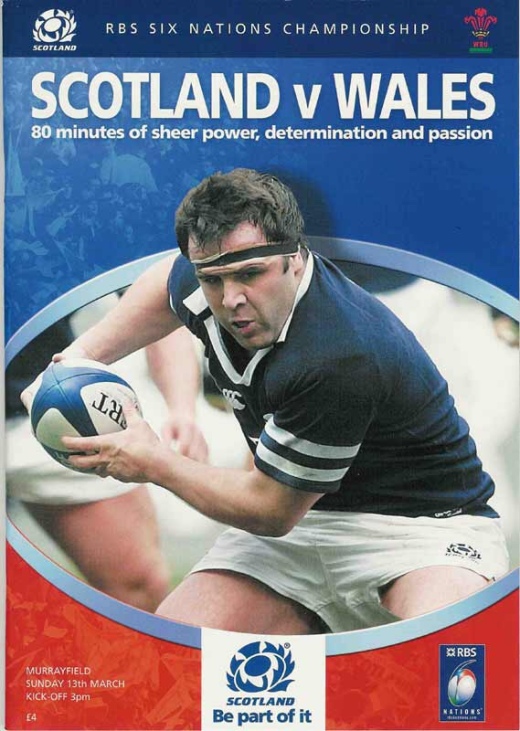 Fourteen years ago Wales headed to Edinburgh with slight trepidation, they had already beaten England France and Italy , and a win at Murrayfield would ensure following week they would face Ireland in Cardiff with the chance to win a first grand slam for twenty-seven years fast forward to 2019 and here we are again, nostalgia and deja vu make a pretty good half back pairing.

So this weekend Wales have much to play for, and so much to lose, a bit like a cup semi final a situation which they  are much more familiar with these days than was the case back in 2005

In many ways the matches the teams and even rugby itself is a world away from that sunny Scottish Sunday, but there are some striking similarities, and once again if Wales beat Scotland on Saturday they will face Ireland for the grand slam in Cardiff seven days later.

In 2005 Wales only had a six day turnaround between matches whilst Ireland had a full week to prepare.

This year the boot is on the other foot, Ireland face France in Dublin on Sunday giving them the disadvantage of a six day turnaround.

Grand Slams and championship wins have been more forthcoming for Wales since 2005, but there was something nervously new about 2005, it was fresh, it was unexpected and during an epic first half at Murrayfield the men in red blew Scotland away showing off all their finery in a joyous attacking display that had them leading 38-3 at half time.

If the men in red had any nerves about the enormity of the task in front of them they were dispelled after only four minutes when Ryan Jones try set them on a glorious path.

Wales were touched with glory on Sunday 13 March 2005, it was as of the ghosts of Barry, Phil, Gareth and JPR had inhabited the men in red to produce running and handling that warmed the heart and gladdened the soul.

That first half must rank as one of the best performances of any Welsh team in any era, they scored three tries in the opening fourteen minutes, and led 38-3 at half time.

So Wales headed home knowing they were in touching distance of the championship and a grand slam, Ireland would have to beat them by at least thirteen points to deny them the title, whilst France have to beat Italy in Rome by a minimum of 42 points to stand any chance of entering the equation.

The days that followed will never be forgotten, lets hope Wales can go back to future this weekend and make the past a more familiar country where they do things exactly the same. 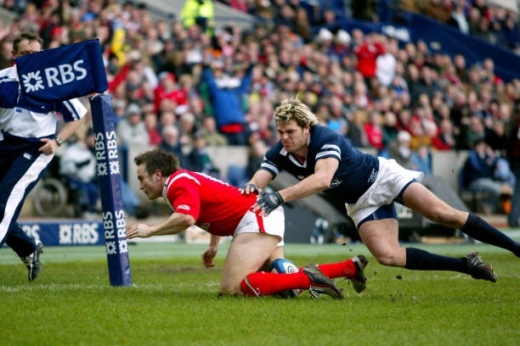 HOW IT ALL HAPPENED

Scotland 22-46 Wales
70 mins: Superb end-to-end rugby results in a Paterson try. Stephen Jones and Morgan combine to send Luscombe through who then stubles resulting in a counter attack going the length of the field, Paterson collects Southwell’s chip ahead. He converts his own try.

53 mins:  Craig slides in for the home side’s first try. Scotland make the most of their numbers, the ball run all the way down the line to Craig. Paterson succeeds with a conversion from right on the touchline.

Scotland 3-43 Wales
49 mins: Some wonderful welsh passing leaves the Scots mesmerised and  Wales are awarded a penalty. Peel takes it quickly and Rhys Williams receives the ball out wide to touch down despite protestations from the Scots. Stephen Jones misses his chance for two points.

Scotland 3 Wales 38
40 mins:  Morgan produces another try fout of nothing. Peel  slices through the opposition’s defenders. Morgan runs a delightful angle and is in the perfect place for the try-scoring pass. Stephen Jones converts.

Scotland 3-31 Wales
27 mins: It’s try number four for Wales as Kevin Morgan acceleratess across the line. following a Shanklin dummy, Stephen Jones then maintains his 100% kicking record with the conversion

Scotland 3-24 Wales
23 mins: Scotland win a line out penaly Chris Paterson gets his first kick through the uprights.

14 mins: Stephen Jones breaks clear and feeds Shane Williams who youches down near the posts a simple conversion follows from Jones

Scotland 0-14 Wales
11 mins:  Rhys Williams  throughintercepts and run the length of the field after Scotland had looked certain to score with players queuing up outside Dan Parks, who instead opted to loft the ball into the hands of the fast-approaching Williams. Stephen Jones converts the try.

Scotland 0-7 Wales4 mins: Ryan Jones produces a scintillating break after a loose kick by Hugo Southwell. Jones has plenty of support and gets the final pass back from Martyn Williams for the try after a series of slick passes. Stephen Jones nails the conversion.