In a word association test the psychologist presents a series of words to an individual, for each word given they are instructed to respond with the first word that comes to mind, Freud believed that such responses provided clues to people’s personalities.

Egg followed Bacon with many, as did cart with horse, but if the word Barbarians would have been offered it would surely elicit a three word response, Mickey Steele Bodger.

Mickey sadly passed away a few weeks ago, aged ninety three, Twickenham felt a little empty yesterday without his presence.

He had been on the Baa Baas committee since 1946, and president since 1988, a lot of Guinness has flowed under the bridge during that time, the drink that displayed the Barbarian colours was given ample endorsement by Mr President.

How proud and delighted he would have been to see the men’s and women’s teams grace the home of English rugby for the first time together, at the ground where he wore the red rose during an international career that spanned nine caps between 1947 and 1948. 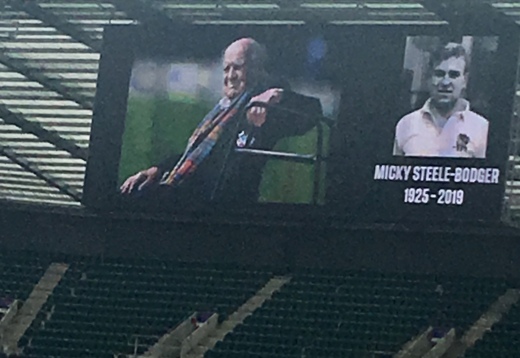 Yesterday we said goodbye, yet we also said hello to rugby inclusion, it may seem a small thing but the Barbarians announced their men’s and women’s teams at the same time, and on the same tweet, a tiny detail but a huge step in terms of how the bright ever growing world of women’s rugby is developing, and just typical of the Barbarians to be the trend setters.

The sun shone from early dawn, and the balmy temperatures felt more like Tenerife than Twickenham, 17,902 spectator’s basked in the heat as they witnessed history being made, the Red Roses bloomed and the Baa Baas wilted, as the England forwards relentlessly knocked the stuffing out of them.

14-0 up after 19 minutes, England never looked like losing, and a 28-0 half time confirmed their ascendency.

The Barbarians had a much improved second half and at last put together some phases  putting pressure on the England defence, they clawed back two tries to make the score 28-14 before England pulled away again to take the score to 40-14 and a comfortable win was assured.

For old timers Rocky Clarke and Danielle Waterman, who have been the pathfinders for the women’s game, this history making Barbarians fixture may well be their last appearance at Twickenham, but thanks to them and many others along the way, the younger players and those yet to come will find matches like this will now be the norm.

I’m sure Mickey was looking down with a Guinness in his hand and smiling a smile of gentle satisfaction, as the club song tells us “For it’s a way we have in the Baa Baas and jolly good way too”.