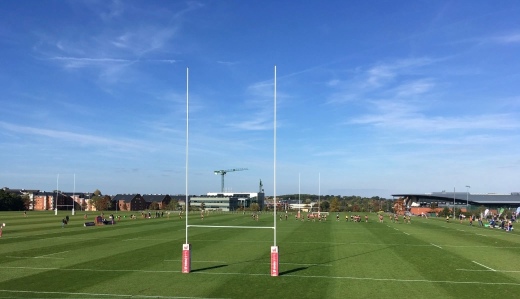 14 months ago I walked away from Surrey Sports Park in Guildford, having been match announcer at the Premier 15s match between Harlequins Women and the team formerly known as DMP Sharks.

Little did we know at the time what the world had in-store for everyone, so to be back there this afternoon after such a long gap, felt quite an emotional occasion.

So much has happened in the Quins camp since that sunny January Saturday in 2021.

Many members of Quins team that day have said goodbye to Surrey and headed off to various corners of the UK and Europe. 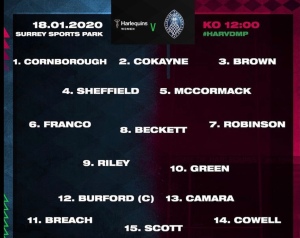 My dear friend Debs McCormack has retired, the delightful force of nature, Giada Franco has returned home to Italy, whilst the lovely down to earth Jade Konkel is about to start training with the London Fire Brigade

Another sad departure has been that of “The French Exocet” Khadi Camara who has gone back home across the channel.

Of course there were lots of comforting familiar sights today, particularly my “Fika” buddy Vic Petersson making a comeback.

After tearing her hamstring off the bone she had been out of action for 406 days, today she made her final appearance in a Quins shirt before she too heads back home, to Sweden.

Today’s opponents Gloucester-Hartbury arrived full of confidence with the number 6 prominent in their psyche. They were 6th in the table with 6 wins and 6 losses. 6×6=36, the number of points they scored against Bristol Bears the previous weekend in a 36-6 win.

It took them 17 seconds to get on the scoresheet with a try by Hunt, and a second try by Lund soon followed to give the visitors a 10-0 lead.

Amy Cockayne’s brilliant individual effort followed by another superb conversion from Green gave Quins a 14-10 lead at half time.

Early in the second half a quick tapped penalty saw Chloe Edwards charge over the line with Green’s deadly boot again adding the extras.

Gloucester-Hartbury responded with an Emma Sing try that meant only six points separated the two teams.

An outstanding defensive display in the final quarter as Gloucester-Hartbury pounded their 22, allowed Quins to apply the sucker punch when, in the 70th minute, a blistering run from Jess Breach left two defenders prostrate on the turf, before she touched down for the home side’s 4th and bonus point winning try.

There was a real winter chill at Surrey Sports Park this afternoon, as Spring decided to have a duvet day, but for Quins a tough heart warming victory hit the spot perfectly.