As we crammed into a capsule on the London Eye on Monday evening, there stood at the front was an imposing figure, in a red T shirt, a man who is adored by the people of his country, Wales, and I am one of his people.

A South African TV crew took the first interview, I could see them struggling to comprehend his delightfully gentle Abercrave drawl, they may have put subtitles on their piece for the folks back home when it is aired.

As the film lights went out and the cameras were packed away, the only two Welshmen in the capsule shook hands 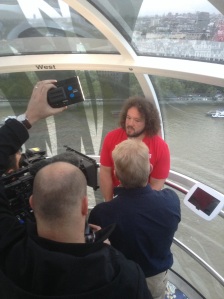 High above the Thames, we asked each other the first question any respectable Welshman will ask another, when they first meet “where you from ” .?

He looks fit and toned, it is difficult to comprehend that his international playing days are over,  he appears to be in his prime, and his skill and experience will be a great loss to Wales in the upcoming World Cup.

He is now adjusting to life in Surrey and a career with Harlequins, as he said ‘all a bit different from back home ”

As we say in Wales there is no “side” to Adam Jones, he was always the fans, or the people’s player, and when he played for Wales you felt he represented you

A gentle and apparently sensitive character , which is in total contrast to his physical appearance  ,the man is like granite on the outside,  its like hitting a wall, one slight bump of the London  Eye and I bounced off those giant shoulders like a pinball, no wonder he has ruled the scrum for so many years.

I have a theory that he was not born but “mined” from Dan-yr-ogof caves , that can be the only explanation for such solidity

Adam will be adored at Harlequins they will take him to their hearts and as my new neighbour , I would like to wish him and his family a happy and healthy stay in leafy Surrey