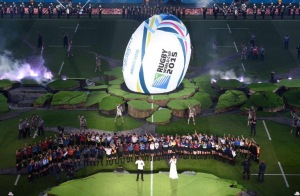 So we are finally underway

The cold hard facts are that England beat Fiji 35-11 and achieved a bonus point win despite a very scrappy performance, in a game that lost all flow, not helped by the constant TMO referrals

But enough of that, the capacity crowd created a party atmosphere and a racket that must have had the locals reaching for the Twickenham councils anti social noise phone helpline

Surely never has the bastion of English rugby rocked to “Sweet Caroline” which nearly drowned out John Inverdale and Clive Woodward, sadly it wasn’t quite loud enough

The opening ceremony had shades of London 2012. The film montage showing Prince Harry in one of his more acceptable fancy dress outfits, not quite James Bond and Her Majesty, but still a double take moment

ITV’s coverage was reasonable enough and inevitably, given the circumstances. A bit of an England “love-in” with Wilkinson, Dallagio and Woodward lined up in the studio like a very stern parole board