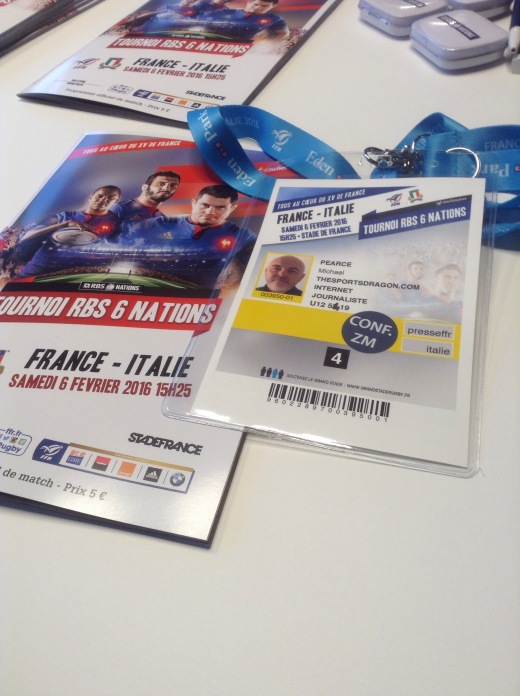 250 police, 900 security staff, snipers on rooftops and sniffer dogs… Not the usual statistics provided for an opening game of the RBS 6 Nations.

My first as a member of the media could not have been more symbolic.

The last event at the Stade de France was on Friday 13 November a day a date that none of us will ever forget.

Guy Noves spoke in the week

Every street corner there were searches, my hotel had an armed officer in the foyer, and before kick off there was a slight feeling of anxiety.

But around lunchtime the sun broke through, Paris had its sparkly top on and the atmosphere changed into a joyous celebration of rugby and life.

The children waved their tricolours the French “DJ’ deafened us old folk with music that had a beat akin to high blood pressure or a migraine, but it was great.

A friendly machine gun  carrying French policeman told me he married a girl from Haverfordwest West, and I met my hero, the Prince of Centres, Denis Charvet in the Press toilets, all in all it was a pretty good day.

The rugby was exciting if not precise but yesterday WAS about more than that.

The President and all his men turned up for a show of solidarity and all passed peacefully with a French win to boot.

Guy Noves has a lot of work to do, but Danty and Vakatawa look very promising , and Plisson played well at fly half, kicking a monster penalty from wide out on half way , with 73:50 on the clock, as France were staring at a home defeat in the face.

Italy look to have found a decent fly half, at last, in the shape of Carlo Canna, who on his debut claimed a full house of try, conversion, dropped goal and penalty.

Poor Sergio Parisse, whose world class talent shone like a beacon throughout the game ,was on the losing side once again, but we are privileged to see this rugby  great in action, I have no idea how Italy will cope when he hangs up his boots.

So Paris slept soundly last night perhaps that was the greatest result.