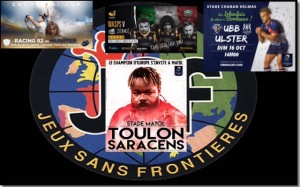 Luckily there is no Article 50 or Brexit to worry about in European rugby, so as Autumn prepares to hand over to winter, domestic rugby spreads its wings and its that time of the year when It’s a knock out becomes jeux sans frontiers.

Yes the European Champions and Challenge cups are back underway.

It all kicked off last Thursday night when the pink shirted Parisians of Stade Francais visited Twickenham stoop.

A well deserved win for Harlequins,  but I don’t know which was more the shocking, Stade’s performance, or lack of it, or their pink dayglow bench coats.

If only they had matched the commitment and urgency I had shown to get to the buffet, in the media room, they might have made the match some sort of contest.

Quins took their chances with aplomb, to gain a bonus point victory over the pedestrian Parisians.

Zebre, an endangered species, almost became extinct after being so badly stung at Wasps.

This was one of the worst mismatches since the first episode of “Take me out” as Wasps with 70% territory and 63% possession scored a point a minute in their 82-14 win.

On the subject of endangered species, Leicester Tigers were given a severe mauling by Glasgow Warriors on Friday night at Scotstoun, the pitch may have been artificial but the 42-13 win was the genuine article.

Calm waters at Parc y Scarlets, and no sign of any dangerous Shark attacks as the star-studded west Wales back line got their jaws into an inexperienced outfit.

A great win but will they be out of their depth when they visit Saracens next weekend ?

The red hand of Ulster visited the red vineyards of Bordeaux and whilst the match wasn’t a vintage they showed plenty of bottle soaking up wave after wave of the homeside’s heavy artillery, until ten minutes from time when Bordeaux finally uncorked to score three tries in quick succession.

Together with  Scarlets win in the Champions cup,the other three Welsh regions, in the challenge cup, had bonus point wins on Friday night with Opsreys thrashing fellow avians Newcastle Falcons 45-0, and Newport Gwent Dragons scorching Brive 37-16 at Rodney parade.

Severn bridge toll booths also had a productive and lucrative Friday night as Cardiff Blues fans returned from Bristol with a 33-20 win.

Reigning champions Saracens headed to the warmth of Toulon, where they obliterated the home team in a first half performance that was close to sheer perfection.

The win was achieved despite being reduced to fourteen men, for a quarter of the game, due to two yellow cards.

Saracens victory surely cements their place as tournament favourites , and by that I mean faourites for any tournament they choose to participate in.

Sadly the weekends rugby was overshadowed by the sudden death of Munster coach Anthony Foley, in the team hotel in Paris on Saturday night.

Sunday’s match between Racing 92 and Munster was called off.

In case you missed any of the results here is a full summary of Round 1 of both competitions.
Challenge Cup