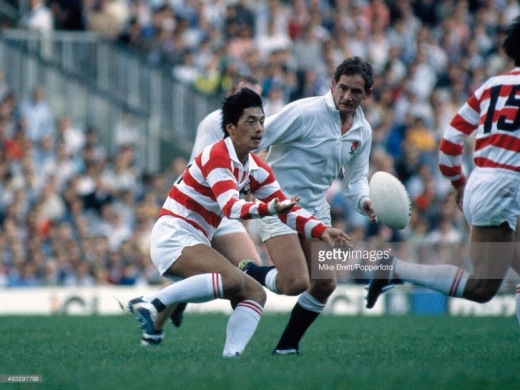 As the match kicked off in front of 15,000 spectators, Japan fly half Sejii Hirao was about to play his thirty fifth and final international match for Japan.

Sadly Sejii Hirao passed away last Thursday, at the ridiculously young age of 53, in hospital where he was being treated for an undisclosed illness.

One of the most popular Japanese players of all time, he was known in Japan as “Mr Rugby”

After graduating from university in Japan he spent 1985 in England where he played for Richmond, following his joyous sojourn in Surrey he returned home and became Japan national coach from 1997 to 2000.

An esteemed member of the world rugby hall of fame, he was looking  forward to his country hosting the next rugby World Cup, in 2019, with a mixture of intense pride and excitement.

As for that rugby World Cup match in 1995 at Bloomfontein, Sejii Hirao scored a try after fifty nine minutes, a match which Ireland went on to win 50-28

A replacement came on for Ireland that day, ten minutes after kick off, when  Eddie Halvey retired inured, the replacements name ? ….. Anthony Foley.

So it was a weekend of minutes silences and applause for rugby men taken from us, for anniversaries of never forgotten children, and teachers, which served to emphasise the glorious irrelevance of sport, and as we all stand together at our fields of dreams in times of sadness and sombre reflection, we find that sport is also a great comforter.

Normal humerous service will be resumed next Monday.