It is the 2019 Rugby World Cup final, 65:43 on the clock and South Africa lead England 18-12, from a South African scrum near half way, Faff Du Klerk feeds Lukhanyo Am, who passes left to Malcolm Marx……… Makazole Mapimpi takes up the story from here.

“I got the ball from Malcolm Marx 50 meters out near the left touchline, I saw that Lukhanyo Am was on my inside, I chipped the ball ahead, he gathered it, I chased up and he gave me the ball to score”. 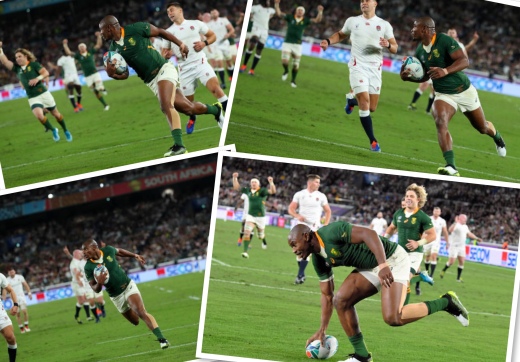 The understatement does not do justice to a wonderful try, South Africa’s first in a Rugby World Cup final, and bearing in mind they won the damn thing in 1995 and 2007 that’s quite a statistic.

The try scorer Makazole Mapimpi is a person more familiar with tragedy than success, his life story is filled with heart breaking sadness, yet the softly spoken wing from Tsholomnqa, in the Eastern Cape, inspired and comforted by his faith, has nothing but gratitude for how things are.

As a back story to the glory and triumph of the Springboks cup final win, there could not be a more earth shattering contrast.

His mother Eunice who ran a sewing machine business was killed in a car accident, his brother Zolani lost a leg after being electrocuted whilst stealing cables, he then died from his injuries, and his sister Zukiswa died from a illness affecting the brain.

On Saturday Makazole swapped Johannesburg for Twickenham and a temperature drop of eighteen degrees, he is part of the Springbok contingent in the Barbarians squad that faced Fiji on Saturday, and will face Brazil and Wales in the coming weeks.

Celebrations back home in South Africa will be going on for quite some time yet, but the official trophy tour ended last Monday.

Makazole walks in looking relaxed with a warm sunny smile that takes the edge off a chilly Twickenham day, his rugby rise has been dramatic, three years ago he was playing first division rugby for Border Bulldogs, he joined Southern Kings before working his way through the animal kingdom with the Sharks and the cheetahs, where he has torn opposition defences to shreds.

Running is the name of the game, he says when he first started playing the coaches in rural areas would remove you from the field if you kicked the ball, there are a few opposition defences that have suffered as a result of that strategy.

His Springbok debut came against Wales last year in Washington, a home game that Wales decided to shift to the USA.

Since then he has scored ten tries for South Africa including six at the recent World Cup. 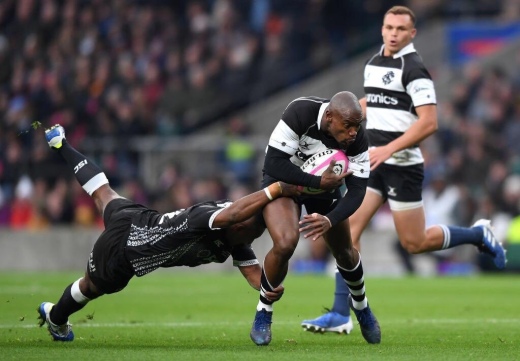 On Saturday he scored two tries for the Barbarians who narrowly lost to a youthful Fiji side in front of a crowd of just over 51,000, both of them were walk ins from five metres out, but that will not bother Makazole, as he rightly says, every one counts.

The 6ft 1inch wing gives the impression of a man at peace with himself, and not much can phase him, after all the he has gone through that is quite some achievement.