Takapuna is a coastal town on North Shore Auckland, with a population of 5,000, it doesn’t hit the headlines very often, the filming of a Shania Twain video in 2003 remains one of its major claims to fame, however an ex policeman stationed in that neck of the woods is about to change all that.

Wayne Jeffrey Pivac was born in Takapuna in September 1962, from birth he had international options with Mum Joan coming from Scotland and Dad George a Croatian from Split.

Wayne’s rugby career ended abruptly at the age of 27 when he suffered a knee ligament injury playing soccer.

A coaching career that includes three years with the Fiji national team has given the former police constable an arresting CV.

So here we are three weeks after the Rugby global showpiece in the land of the rising sun, and a new dawn has arrived in Wales.

Wayne Pivac has taken over as Welsh coach from his fellow Kiwi Warren Gatland, to say he has a tough act to follow is an understatement of the highest order, but the man who made the Scarlets sparkle is intent on doing exactly the same job on his current red shirted squad.

“I will be doing my best to protect the legacy which Warren Gatland, with the help of the players, has left behind. It will be an almighty challenge, but one that I’m more than ready for”.

“Having lived in the country for four years, I don’t see myself as an outsider, but as a Welsh coach, I would not have put myself through the process if I did not feel it was something I could do, and be passionate about”.

A four year contract that officially began in July 2019 makes Pivac the fourth New Zealand born coach to take charge of Wales  and he is not fazed with the prospect of following Gats.

It’s been a pretty momentous year for Wayne Pivac, as Wales clinched a Grand Slam in the pouring rain in Cardiff last March, he was marrying Mikaela back home on Takapuna beach.

Eight months on Wales men face the Baa-Baas as part of a double header with Wales women and Pivac has selected a squad that includes 22 players who featured for Wales in the 2019 RWC and five uncapped players. 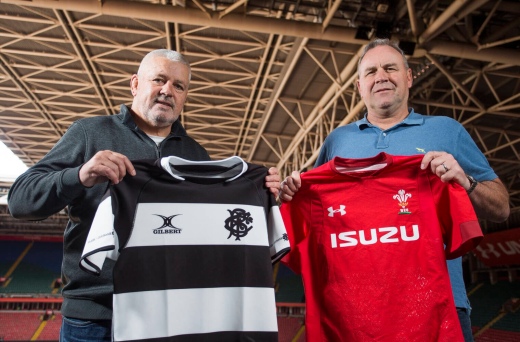 Just to make things a little tastier Warren Gatland will coach the Barbarians squad for this match.

“It is great to get the squad announced and get the ball rolling on our first meet-up and first fixture next week”.

“This Barbarians game is a great chance for us as a new squad and management to get together and to set the scene for what we are looking to do. Having this opportunity ahead of tournament rugby in the Six Nations is ideal for us”.

“It is also a great chance for some players to really put their hand up and show what they are about and take to the field in front of a big crowd at home”.

“We will be bringing a few additional players in to train with the squad during the week, just to see them in the environment and will also be bringing some of the injured players in for some of the scene setting style sessions.”

Following Warren Gatland is a tall order but all of us with red blood in our veins hope that this particular policeman’s lot will be a happy one.