Naples is no stranger to seismic activity, Mount Vesuvius is the only volcano to have erupted on mainland Europe in the last one hundred years.

Situated on the breath-taking gulf of Naples, it has a majesty, beauty and power that showcases nature in all its terror and wonderment.

The last eruption came in 1944, although in 1996, another force of nature was about to enter the landscape, Giada Franco.

The family moved 54 kilometres south east, along the Amalfi coast, to settle in Salerno, a lively port with a relaxing Mediterranean ambiance, and an historic town full of tiny little passageways and hidden corners.

Many have felt the aftershock of the dark haired flanker’s rib shattering tackles, and her eruptions, unlike Vesuvius, are now taking place on a weekly basis in the Tyrrells Premiership.

Giada joined Harlequins Women at the start of the season and made her club debut in the opening match of the campaign, which saw Quins romp home to a 101-0 victory over near neighbours Richmond, an instant success, she scored her first try for her new club in the 77th minute against Worcester Warriors on match day two.

She played in all seven of the clubs Tyrrells Premiership games so far this season scoring tries against Worcester Warriors, Gloucester-Hartbury, Loughbourough Lightning and Firwood Waterloo.

Away from rugby the young lady of Naples is a big fan of “Le vechia signora”(The old lady of Turin) which for the uninitiated,  is the nickname of Juventus football club, one of the giants of the game.

A firm fixture in the national side, Giada made her  international debut in the 2018 Six Nations in Dublin, a couple of weekends ago she gained her 13th cap against Japan, and has scored four tries in the process.

Giada is part of a truly international sisterhood at Harlequins, training playing and socialising with players who have donned the shirts of England, Ireland, Scotland, Wales, France, Australia and Sweden, the cosmopolitan vibe at the club is a joy to behold. 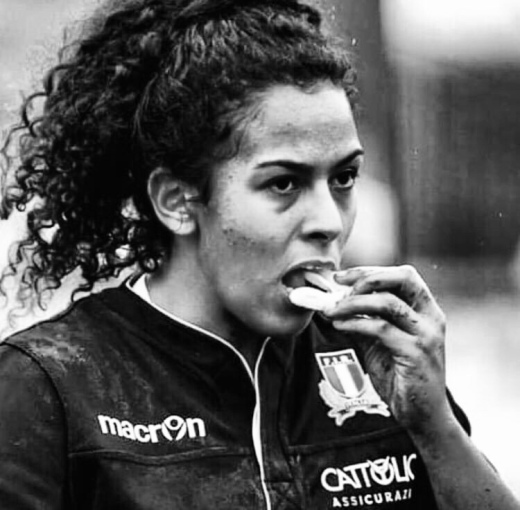 One of her most memorable moments came at the Principality Stadium in the Six Nations double header against Wales in 2018, when the “Azzura Assasin” played a blinder, it was the first time I had seen her play, she made a huge impression and has been a permanent fixture in the national team ever since.

Settling into English life has been easy but she did admit to missing the sunshine and the gastronomical delights of home, particularly “Bistecca alla Fiorentina” which is a thick cut of porterhouse steak from an ancient breed of Tuscan cattle, instead of inches, these steaks are measured in fingers, and a good one will be 3-4 fingers thick, and Giada insists they don’t forget the fries.

Of course she misses her Mum, back home in Salerno, and their unbreakable bond is very evident from the loving and protective way she talks about her, fortunately her sister is nearby in London so “la dolce vita” is never far away.

This planet is a small place where the past and present are indelibly linked, sitting in the warmth of Surrey Sports Park, discussing the joys of rugby, and life, over a coffee, we discover that both our grandfathers saw active service in Salerno during the Second World War, it is a small world indeed, but one in which Giada Franco is making a big impact.