Carmarthenshire is a very magical place. Tucked away in West Wales the county’s mystical qualities are enhanced by the fact that it is reputed to be the birthplace of Merlin, the magician of Arthurian legend.

If you have any doubts about these matters then I refer you to Merlin’s oak which stood on the approach to Carmarthen’s town centre amid the legend that King Arthur’s famous wizard had placed a protective curse on it. In local tradition, the wizard said Carmarthen would “drown” if the oak was ever removed, and some even said a curious, pointed notch in the tree was the face of Merlin himself.

In fact, the tree was poisoned in the 1850s by a local who objected to people holding meetings beneath it, but its trunk was preserved within iron railings. It was then removed from the town when someone set it on fire at the end of the 1970s. Carmarthen then suffered its worst floods for many years.

The county of Carmarthenshire is also the birthplace of the subject of this article, and indeed its writer. The rolling green hills have produced more magicians than the magical circle, the towns and villages producing a conveyor belt of rugby wonderment.

The tiny village of Mynddcerig had a recorded population of 303 in the 2011 census, this village has now been noted and mispronounced all over the world due to just one man, Nigel Owens.

Yesterday on a farm near Llanelli a herd of prize Hereford’s munched on their feed with a sense of bovine pride as their boss was creating history in Paris.

Nigel has never been one for taking any bull on the rugby field, but back home it’s a different story.

The lush green fields of Carmarthenshire are consistently visited by precipitation from the nearby Atlantic Ocean, one of the reasons why it is such a wonderful farming area.

Two weeks ago he had Georgia on his mind at a damp and gloomy Twickenham, but yesterday it was the city of lights that provided the setting for the Welshman’s 100th test match.

France faced Italy in a deserted Stade de France due to COVID-19, but it was another dreadful disease that occupied Nigel Owens sleepless nights in the lead up to this memorable occasion.

It was a case of TB or not TB as he and his herd awaited the results of statutory bovine TB tests. Thankfully the results all came back negative. 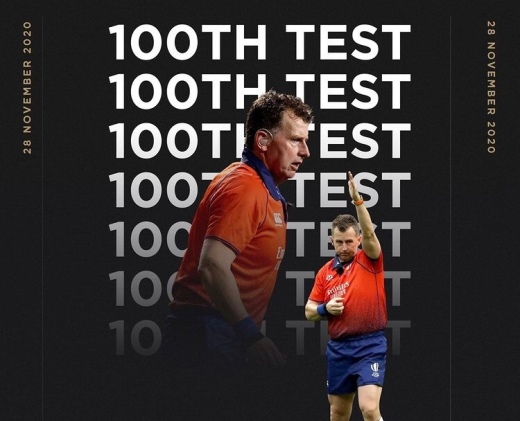 This could be the last international assignment for the much loved whistle blower but players and fans alike are hoping to see him in action during the 2021 Guinness Six Nations. 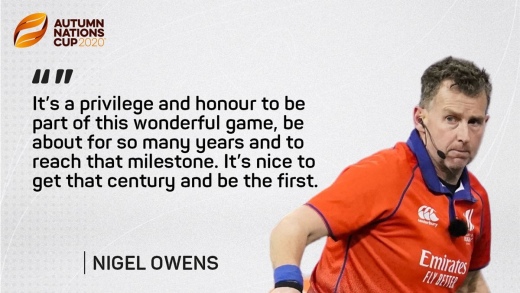 On a personal note I count myself privileged to call Nigel a friend. When he offered to write the foreward to my book on French Rugby, due for publication by St David’s Press in 2021, I was delighted beyond words.

Last night as a deserted post match Stade de France shimmered in the Parisian moonlight, a Carmarthenshire man’s thoughts turned to the rolling green hills of home, and Merlin doffs his cap to the wizard with the whistle, oh there is magic in these parts alright.