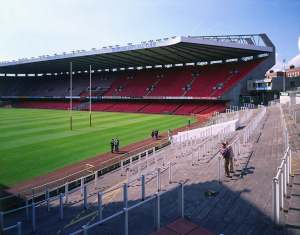 Where did this love affair start?

My earliest memory is that of an old black and white television, in my uncle Eustace’s house, in Leatherhead, Surrey, I recall a grainy, almost sepia, picture with distorted sound; emanating from a tiny veneered wooden cabinet.

I had no interest in what was being watched by my father and my uncle, that day, I was aware however that they were particularly excited….

It was Saturday 15 April 1967… I was 9, not much older was Keith Jarrett, an 18 year old schoolboy, making his debut for Wales, against England, at Cardiff Arms Park, from what I could gather, he seemed to beating England single-handed. He ran in a try from his own half, kicked penalties and conversions galore, each one hitting some part of the woodwork before bisecting the goalposts.

Jarrett was picked at full back, a position he had never played before, but needless to say there was no way that Wales were going to lose that day, he was somehow “touched with glory”

There is an old anecdote stating, that later that night, long after the team dinner, and celebrations had ended, Keith Jarrett found himself at Cardiff bus station, he had just missed his last bus home, to Newport.

He noticed a bus driver finishing his shift and asked him how he could get to Newport. the driver replied that the last bus had gone, and the next one was Sunday morning.

Don’t worry said the driver I’ll get one of these buses and drive you home myself.

He was getting into the cab of his bus when he spotted an inspector marching towards him.

“Where do you think you are going that bus” he barked,

Well said the driver nervously, I’m driving Keith Jarrett home, he’s missed his last bus, after all he did beat England this afternoon, almost on his own….

“Take that bus back immediately” shouted the inspector..

“Go and get a double-decker”… the lad might want to smoke.

That distant event stands alone as my first and only rugby memory, until the affair blossomed in 1969.

In that match, Keith Jarrett scored a try breaking from his own 25 yard line and running most of the length of the pitch. He also converted the try from just inside the touch-line., and kicked two penalty goals and five conversions.

His career was cut short in 1973, aged just 25, when he suffered a stroke resulting from a brain hemorrhage. .

For some inexplicable reason in the intervening years I found myself more interested in Gordon Banks, Bobby Charlton and the England football team.

What caused this mental breakdown I have no idea…. I found myself playing football and pretending to be Bobby, even to the extent of, when taking a corner, or a penalty, I would pretend to be bald, and comb over the few strands of hair on my head with my hand. (prior to kicking the ball, just like Bobby Charlton did) something I could have done with much greater realism not too many years later, when my testosterone fuelled body decide to dispense with my sleek locks.

The cure for this mental aberration, and national treason, was found on a spring day in 1969, April 12th to be exact.

I found myself sitting in front of yet another black and white television; when almost mystical The grandstand programme came on, and was showing the Wales v England Five nations match live from Cardiff.

The sight of the Wales number 10, a young man, born in the same town as me, ghosting past English defenders, that day, like a phantom,, made the hairs on the back of my neck stand up..

He was to be the catalyst of that love affair that is still burning brightly to this day.

That young man was Barry John, for many, the greatest fly half of all time.

Barry played with insouciance, bordering on arrogance, he always seemed to have more time on the ball than anyone else, and on the end of Gareth Edwards magnificent spin pass he was in my mind the greatest.

The sadness is that in 1972, at the age of only 27, with 25 Wales caps and five British Lions caps, BJ retired from the game. He cited the media attention and the unfair expectations of his country as the reasons, for his retirement, believing he was “living in a goldfish bowl”

He stated that the event that drew him to retire from rugby was when a young girl curtsied to him outside the opening of an extension to a local bank, in reference to his nickname. “The King”

Anyway back to 1969…And in perfect symmetry, it was Wales v England, again, two years on from that first distant sepia memory.

Wales beat England by 30 points to 9.

Now this love affair has not been plain sailing…. We have had many ups and downs. There were times when we were sick of the sight of each other, but I was never unfaithful.

There were times when I just wanted to be left alone, when I thought I can’t carry on, but always somewhere there was a touch of magic, however slight, that kept me going.

“We are the nation of the possessed where rugby football is concerned.

We identify with out national team more completely than any other nation.

Now again we are in ecstasy”

One thought on “Where Did This Love Affair Start”