There have been many times when I have shed tears for Wales, too many to mention in detail, to be honest I have spent forty-six years crying for Wales on and off, and it never gets any easier.

Sam Warburton’s red card in the 2011 Rugby World Cup sem-final takes some beating, what was worse was having to watch Sam on the touch-line looking so dignified, when the whole of Wales wanted to give him a collected hug poor lad. 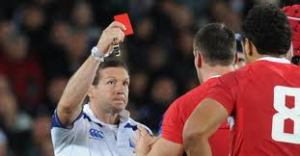 But I am going back 45 years to recall my first encounter with the emotional pit falls that are an essential part of being a Wales rugby fan.My main problem you see was that I at my hormonal peak in the 1970’s, despite the perils of a broken voice and acne, “I was there” when Wales had JPR, Barry, Gareth, Gerald and Merv, which meant that you were more likely to see Halley’s comet than a Wales defeat.

England were playing Wales at Twickenham, I was at my Gran and Grampa’s house, because they had a colour television, my gran loved JPR and the harder he tackled the more she loved him, bless her

I settled down on the sofa expecting the usual routine Wales victory, but then it started going horribly wrong, firstly JPR was flattened, well JPR was always the “Flattener” not the “Flattenee” and as a result David Duckham scored in the corner.

A mere temporary setback I thought, until John Novak scored another try for England, this was getting serious, before I knew it Wales were 13-6 down, then came the final straw, Gareth Edwards had to go off, injured, with a pulled hamstring… that was it !

Feeling hot and clammy, the tears were welling up in my young eyes, I felt sick, I didn’t know what to do,so I  ran to the bathroom to try to hide my emotions from my grandparents, I remember praying with all my heart, you see I was a choirboy, so I felt that I might be given some leeway by the almighty, for service rendered as a soprano

Well something cosmic happened, I returned to the lounge and before I could sit down JPR had scored a try for Wales, Hey, maybe this praying lark works, then Gareth’s replacement “Chico” Hopkins scored another try, JPR converted and suddenly Wales were leading 14-13.

And to top it all, a Barry John drop goal in the last-minute, Wales win 19-13

Now, a cautionary tale, I’ve tried this prayer thing, on many, many occasions since, and it has never worked, going back to Sam’s red card I even went the extra mile and was down on my knees praying, to the cats dismay.

Still the miracle of 1970 has never been forgotten, the first tears for Wales, but cerainly not the last.