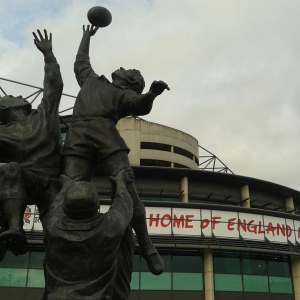 It was with great reluctance, and a heavy heart, that I headed to Twickenham this morning.

The last place a defeated Welshman wants to visit, less than a week after a defeat to England, Is Twickenham.

But I have to be professional, after all, I am trying to make a living.

As my train, packed with commuters, judders towards Clapham Junction, I drift into a weary daze, a bit like George North last Friday.

I can see a dark Cardiff night, and Jamie Joseph, after twenty phases of English play, skipping through despairing Welsh defenders to score THAT try.

I see the Welsh scrum retreating, churning up the dewy green grass as it  back pedals at a rate of knots… luckily I am awakened by a fellow travellers briefcase in the small of my back,which brings me back to a state of alertness, wow ! this post traumatic stress can really get to you.

Anyway, I arrive at the North East gate of Twickenham, where the press have been told to assemble for the Captains run.

Andy Farrell arrives, I shake his hand, my brain is primed to say, congratulations, well done, a deserved win last Friday, but my mouth has other ideas and out comes a trickle of saliva, and a sort of Barry White mumble that causes him to look at me, with a mixture of pity and amazement. 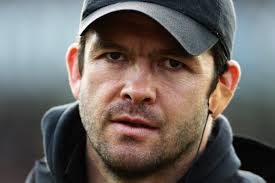 Andy looks fit and relaxed, the result last week seems to have lifted the weight of the world that was firmly on the England management teams shoulders before the Wales match.

The Twickenham pitch looks magnificent, “Billy Williams cabbage patch” as it was all those years ago is now a state of the art  desso Grassmaster hybrid grass pitch

The installation of the high-tech pitch was part of a complete make-over of the stadium in preparation for hosting this years Rugby World Cup.

Head Groundsman Keith Kent says: “The old field only allowed 20/25 mm of water to drain away in an hour, whereas the new Desso GrassMaster system copes with up to 250 mm an hour.”

Andy Farrell tells me about the feel good factor last weeks win against Wales has created around the country, my inner voice replies “Yes Andy I am fully aware of this fact, I am a Welshman living in England, I’ve had so much abuse during the last seven days, Amnesty International have been e mailing me”.

Andy goes on to say that they are not taking Italy lightly, and that any thoughts of a St Valentines day massacre are totally unrealistic.

So maybe I have last found some closure, another magical RBS 6 Nations weekend looms and I can’t wait for it to start 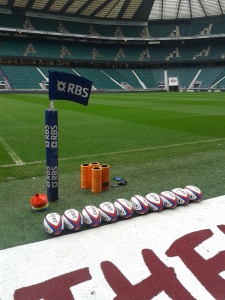