A young  boy swathed in a red and white scarf his eyes wide with wonderment was firmly grasping his father’s hand as they walked slowly almost dazed down Westgate Street, after an epic game of rugby between Wales and Ireland on Saturday.

His face was pale and drawn with the emotion of it all, once he regains his strength, this will be a day he will remember for the rest of his life.

Most Welsh rugby fans will have a similar memory, and how lucky are we to own such a wonderful treasure, my generation have the seventies 71, 76 and 78 when we first experienced that wonderful sensation of a Welsh Grand Slam.

Our cranial YouTube channel can instantly recall Barry John’s broken nose, JPR’s shoulder barge on Gourdon, and in a week when storm Gareth hit the UK, I can recall another Storm Gareth, Edwards the Knight , dropping a towering drop goal to seal a slam.

That young boy who thankfully had some colour returning to his cheeks, by the time he reached St Mary street, will have a similar treasure chest to carry through his life although of course his recall will be aided by Instagram Facebook Twitter and snapchat where he can instantly re run the action.

As the wind howled and the rain cascaded on to the streets of the Welsh capital he no doubt  began to download the mental images that will be recalled time and time again throughout his lifetime, of Alun Wyn Jones swathed in bandages majestically striding his field of dreams, of hymns and arias and bread of heaven echoing around the stadium, loud enough to shatter his eardrums.

For those of my generation who can remember every minute details of matches in the sixties and seventies, yet cannot recall why they went into the kitchen ten minutes ago, this slam brings tears to the eye, a tear for the present, a tear for the past, and a tear for those no longer here to share it with us. 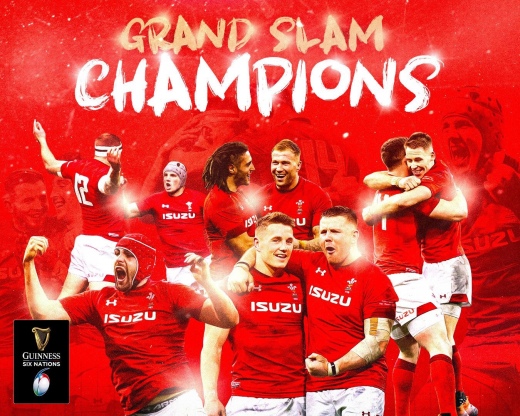 One thing that spans the generations is that on Saturday night, as storm Gareth rattled the window panes and the wind rustled in the trees, we all enjoyed a joyous cosy sleep only interrupted by the images of Hadleigh, Alun Wyn and the other heroes clad in red  living out or our dreams.

A grand slam is a wonderful thing indeed, and as Van sang “My mamma told me there’d be days like these”, but she didn’t tell us they’d be this good.