In Greek mythology Zeus, the most powerful of the Olympian gods, was the master of the thunderbolt, Cyclops the men of the golden race gave him the weapon.

In yesterday’s Tyrells Premier semi final between Harlequins Ladies and Loughborough Lightning, at Twickenham Stoop, the away side produced some glorious flashes, but it was Quins that provided the thunder that ultimately won this contest.

Their line speed, and defensive brilliance constantly drove back Lightning, Khadidja Camara. the Quins centre had more hits than Take That, she tackled everything that came her way.

If there were to be a Greek goddess of back row forwards then Jade Konkel would fit the bill perfectly, scoring two tries, battering the gain line constantly, and she came off the field exhausted and battered  justifiably won the player of the match award. 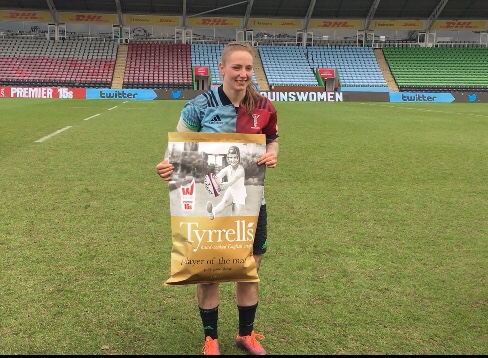 At full time the teams looked absolutely shattered, both sets of players had given absolutely everything, Hypnos the greek god of sleep was not be required last night.

1,265 turned up on a cold afternoon at the Stoop, it appeared that another greek god, Boreas, the god of the north wind, had provided an icy accompaniment to proceedings, but it didn’t take long for things to warm up on the field of play.

Quins scored first through Jade Konkel in the 4th minute, two minutes later Carys Williams, who looked dangerous throughout scored a sparking try for Lightning to levels the scores at 5-5.

Jade Konkel got her second try on 38 minutes, and an Ellie Green conversion gave Quins a 12-5 lead at half time.

Twelve minutes into the second half Vickii Cornborough powered over for a try converted by Ellie Green, and on 69 minutes Leanne Riley’s quick thinking earned her a well deserved try once again the conversion was supplied by Ellie Green. 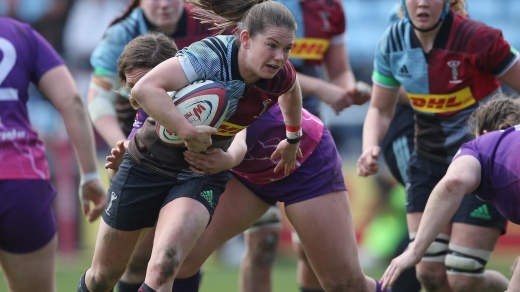 Megan Davey got a consolation try for Lightning on 78 minutes, but the game was won by that stage,

This was a clash of the titans, the physical contest was immense and the hits ferocious, both sides suffered injuries and at one stage the pitch resembled a battle field, we can only hope that Apollo, the greek god of healing will assist to ensure Quins are at full strength for the final in two weeks.

Quins now face Saracens in the final, at Franklins Gardens, on April 27, a repeat of last years final, it may well be worth getting in touch with Fortuna, the greek goddess of good fortune, it certainly can’t do any harm.